The tequila family legacy begins to consolidate with Eduardo Orendain Orendain, important figure in the history of Magdalena and Tequila, since the second decade of the twentieth century founded Tequila Orendain de Jalisco, SA, continuing the family tradition since 1844. From that time, and the consolidation of the tequila industry, the name Orendain has been an important part of the tequila industry. His descendant, Don Eduardo Orendain González, settled in the distillery La Mexicana, which is still owned by the Orendain family in second direct generation. He was the founder and first president of the Regional Chamber of Tequila Industry and of The Tequila Regulatory Council where it can be found a bust of him. The next generation has been promoting the Tequila Official Standard, the Denomination of Origin and have been founding members of the Tequila Regulatory Council. Tradition, respect for the countryside and the manufacturing process operated by Don Eduardo Orendain result in the best tequila. Tequila Orendain today has more than 5000 hectares of Agave, counting among its lands el Cerro de Tepecoste, unique hill of Tequila, Jalisco, which by its extraordinary natural and geographical features the best agaves.

<< Back to Tequila Cantinero Home 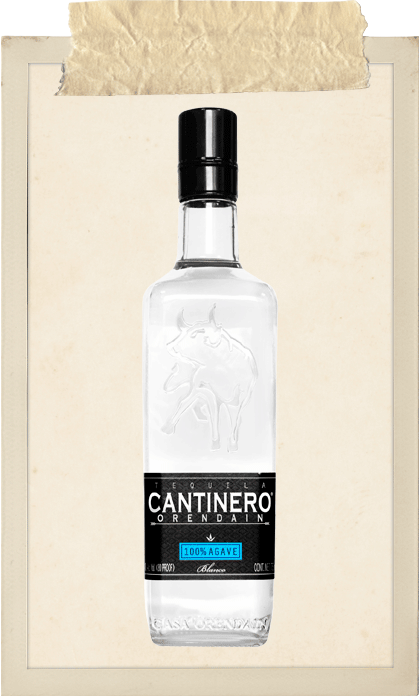 A 100% Agave tequila for those seeking quality at the right price, with excellent flavour and just the right balance of softness that give it excellent characteristics to take it right or mixed. Cantinero use Agave Azul Tequilana Weber cultivated in their own fields and harvested at optimum ripeness to ensure that combines the best qualities to make a great tequila. Only traditional masonry ovens and autoclave is used for cooking. Fermentation is a slow procedure where special natural yeast strain maintained virtually unchanged for years as part of our original recipe. It is then double distilled by traditional method in stills.

Thyme and agave, with a hint of bright citrus sweetness.